Highlights for the year under review are summarised below:
• Revenue increased by 37% from $39.9 million to $54.4 million;
• Improved operating space as a result of the Scheme of arrangement;
• 32% reduction in cost of sales as a result of cost cutting measures implemented during the year;
• Improved rail logistics as a result of the revival of the National Railways of Zimbabwe;
• Supplier contracts reviews and low cost production strategy on course.

On behalf of the Board of Directors, I present the audited financial results of Hwange Colliery Company Limited for the year ended 31 December 2017.

PERFORMANCE
Though favorable than the comparable period in 2016, the company’s performance for the period under review fell short of budgetary targets. This was
due to low production levels attributable to working capital constraints. Monthly production average was 110,000 tonnes compared to the budgeted monthly
production of 340,000 tonnes. As a result, the Company failed to meet the market demand.
Total sales tonnage was 1,288,485 tonnes against a budget of 3,607,799 compared to 921,627 and 3,597,050 respectively recorded in 2016. Cost of sales reduced by 32% as a result of the following cost cutting initiatives implemented during the year under review:

a) Reduced labour costs resultant from a voluntary retrenchment exercise;
b) Reduction in contractor costs and contractor rates;
c) Underground mine, coke-works and wet screen plant costs accounted for as care and maintenance costs;
d) Non recurring costs of $19m incurred in 2016 relating to a stock adjustment.

SCHEME OF ARRANGEMENT
The Company’s scheme of arrangement with its creditors afforded the Company moratorium while building the financial resources to capacitate the
Company to meet its financial obligations. The Company is grateful for the support received from all its stakeholders and still requires such support
notably from its creditors, employees, suppliers and shareholders. The Board remains confident that the turnaround efforts shall yield the desired results.

OUTLOOK
As demonstrated by the financial results, there are signs of recovery. The narrowing of the loss position confirms the Company is on course with its recovery path. The strategic priorities for the Company’s year-end were the following;

b) Open Cast Mining
The Company’s open cast operation contributed 589,142 tonnes for the year which represents 47% of the total year end production. There
were constraints in the logistics and processing section of the value chain which are being addressed. Coal movement was largely by
road which was an expensive mode of coal movement. The revival of the National Railways of Zimbabwe will come as a solution to the logistical requirements for the product to reach to customers in a cost effective way. Efforts continue to be made to secure working capital.

c) Resuscitation of Underground Mine Operations
The Company managed to resuscitate underground mine operations beginning the 4th quarter of 2017. While the resuscitating of the underground mine operations were delayed, its a sign towards recovery as production of high value products is set and the Company’s capacity to generate export sales from coking coal and coke is enhanced. While foreign currency remained a challenge during the year, support was received from the Reserve Bank of Zimbabwe in availing
foreign currency needed to import the key pieces of equipment for the underground mine.

d) Coke Production
The Company’s intended takeover project of the Hwange Coal Gasification Company (HCGC) Coke oven battery pursuant to a BOOT Agreement with its Chinese partners in HCGC was delayed. Engagements remain in place to ensure that this is achieved without placing risk on the Company.The cautionary that had
been published was withdrawn because the takeover may be further delayed.The Company has placed more emphasis and attention on the resuscitation of its own coke oven battery.

e) Cost reduction
The Company adopted a low cost high productivity strategy. This has enabled the Company to significantly reduce its costs. The employment costs have reduced owing to the short time working arrangement as well as revision of employment benefits in line with industry best practice as well as Company’s capacity to pay.

f) Zimbabwe Power Company’s Stage 3 Expansion
The Company concluded an Exploration Agreement with Fugro Earth Resources to undertake exploration and drilling of the Western Areas Concession. Thereafter, mine development will follow after securing funding for this phase. Related to this, the Company has engaged KPMG Financial Advisory Services for purposes of fund raising for the Western Areas development.

g) Improve efficiencies and competitiveness
As the Company increases the thrust on the core business of mining, it will also look at ways of allowing other entities to assist in the running of town services such as road maintenance, electrical power distribution and sewage treatment. The adoption of enterprise resource planning systems to automate the administration of the business will also improve efficiencies and lower the cost per ton of coal produced.

REALISATION OF POTENTIAL
Strategic plans to unearth the Company’s potential are being developed and these include:-

b) Rebuild or replacement of Hwange Colliery’s Coke Oven Battery
The company’s coke oven battery was shut down in mid-2014 in a controlled manner in order to prevent damage to the oven furnaces. Despite many interventions over the years to implement a rolling rebuild, the plant was old and beyond its economic life. Therefore the Company has invited bidders to tender for the full rebuild of the coke oven battery, by-products plant and ancillary plants or the supply of a completely new coke oven battery of the same capacity together with the by-products and ancillary plant.

c) Fixed plant repair and restoration of full capacity
As a mine that has operations spread-out on a wide geographic area, it is important to use efficient means of transporting coal from the pits to the processing plants and the rail siding. Therefore the repair and full capacity restoration of the coal handling plant, conveyor belts and the No 2 processing plant is a key enabler for high volume and least cost production.

d) Development of Western Areas and Lubimbi West and East Concessions
The life of mine at the current open cast operations is estimated to be less than 5 years. Therefore the development of the Western Areas coal fields to a full scale mining operations is critical. A 25 year coal supply agreement was already signed with the Zimbabwe Power Company’s Hwange Power Station Stage 3 expansion. In addition, a 25 year coal supply agreement was also signed with an Independent Power Producer whose operations will be located at Milibizi in Matebeleland North Province. Bidders have been invited to tender for development of the coal bed methane resources at Lubimbi East. These new developments are important for the future of the company as it turns around and re-aligns itself for higher volume production and focuses on least cost production techniques.

DIRECTORATE
During the year under review Messrs W. T. Kutekwatekwa and A. M Ngapo resigned from the Board of Directors effective 18th and 28th of July
2017 respectively. Mr W. Chitando who was serving as the Board Chairman resigned from the Board on the 7 th of December 2018 following his appointment
as Minister of Mines and Mining Development. The Company acknowledges the contribution made by the three (3) resigned Directors and wishes them well
in their current and future endeavours. There are still vacancies on the Board which require shareholders to make appointments in order to strengthen the composition of the Board.

APPRECIATION
Whilst the Company was still in a loss position, the financial results demonstrate signs of recovery resultant from a concerted team effort to turnaround
the Company. The Board is grateful for the support rendered by all stakeholders to its turnaround plans. I would like to express my gratitude to my fellow
Directors, Management and Staff for their collective efforts and dedication to the Company. 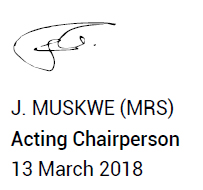