Notice is hereby given that the ninety fifth (95th) Annual General Meeting (AGM) of Shareholders of Hwange Colliery
Company Limited will be held at Royal Harare Golf Club, 5th Street Extension Harare on Friday 29 June 2018 at 10:30 am
for the following business:

1. ORDINARY BUSINESS
1.1. To receive and consider the audited accounts and the reports of the directors and of the auditors for the year ended
31 December 2017.

1.5. To elect auditors of the Company, Grant Thornton Chartered Accountants (Zimbabwe) for the ensuing year.

2. SPECIAL BUSINESS
To consider and, if deemed fit, pass with or without modification, the following additional resolutions:

3. OTHER BUSINESS
To transact such other business as may be transacted at an Annual General Meeting.

4. PROXIES
Members are notified that they are entitled to appoint one or more proxies to act in their alternative, to attend and vote and
speak in their place at the meeting. A proxy need not be a member of the Company. Proxies must be lodged at the registered
office of the Company at least forty-eight hours before the meeting.

For use at the Ninety fifth (95th) Annual General meeting of the Company to be held at Royal Harare Golf Club, 5th Street Extension Harare on Friday 29 June 2018 at 10:30 am. 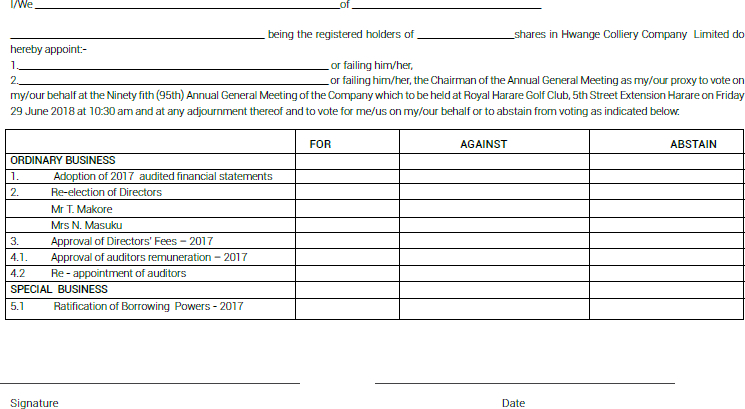 NOTES OF PROXY FORM
1. A Shareholder entitled to attend and vote may insert the name/s of one or more proxy/ies or the names of two alternative proxies of the Shareholder’s
choice in the space provided, with or without deleting “the Chairman of the Annual General Meeting”. Any such proxy, the proxy will be exercised by the
chairman of the meeting.
2. The person whose name appears first on the proxy form and is present at the meeting will be entitled to act as proxy to the exclusion of those whose
names follow.
3. A proxy is entitled to one vote by a show of hands by a poll one vote in respect of each share held. A Shareholder’s instructions to the proxy must be
indicated in the appropriate space.
4. If a Shareholder does not indicate on this interment that his proxy is to vote in favour of or against any resolution or abstain from voting or gives
contradictory instructions or should any further resolutions or any amendment/s which may be properly put before the Annual General Meeting be
proposed, the proxy shall be entitled to vote as he/she thinks fit.
5. Any alteration or correction made to this form must be initialized by the signatory/ies.
6. The completion and lodging of this form will not preclude a Shareholder from attending the Annual general Meeting and speaking and voting in person
thereat, to the exclusion of any proxy/ies appointed in terms hereof, should such Shareholder wish to do so.
7. Forms of proxy must be lodged with or posted to the Secretary, Hwange Colliery Company Limited, to be received no later than 48 hours before the
time fixed for the meeting.
8. The Chairman of the meeting may accept or reject any proxy form which is completed and/or received other than in accordance with these instructions

CHANGE OF ADDRESS
If the address on the envelop of this letter is incorrect or has changed, please fill in the correct details below and return to the Secretary.